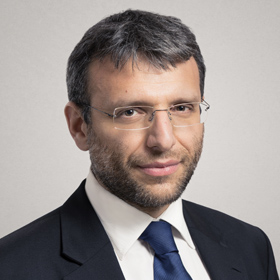 Vasilis is one of the leading Administrative and Public Law experts in Greece. He is widely recognised for his success in representing clients before the regulatory authorities, trade commissions and tribunals in relation to public law issues and has acted in many of the high profile cases in this sector. His substantial experience extends to advising major suppliers to the State from numerous industries on their participation in public tenders and their entry into administrative contracts. Vasilis represents clients before the administrative courts and tribunals in disputes arising from public tender awards and the fulfilment of government contracts. He also has an expertise in advising on regulatory compliance and permit procedures in a contentious and non-contentious setting.

Vasilis has been in private practice since 2000. He was a member of the Editorial Board and Editor in Chief of the Application of Public Law periodical and is currently the Editor in Chief of the Newspaper of Administrative Law. Vasilis has been widely published within his area of expertise, including comments on decisions of the Council of State on Equivalent Constitutional Provisions, the Protection of Personal Data, the Concept of Forest Land and the Protection of the Environment and the Constitutionality of the Joint Ministerial Decision which Prohibits Changes to Religious Status for the Issue of Identity Cards.